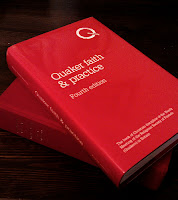 One much repeated 'Quaker saying' among British Friends is 'Think it possible that you may be mistaken'. It even appears at the back of Quaker Faith and Practice in the 'Index of well-loved phrases' where it is only attributed to A&Q or Advices and Queries.

The sentence certainly appears as part of A&Q and indeed also in the Advices in Christian Faith and Practice, the former version of Britain Yearly Meeting's book of discipline. So it has some pedigree as a 'Quaker saying' but who originally said it?

In fact it comes from the era of early Friends but not from a Quaker. The original, fuller, version was written by Oliver Cromwell to the General Assembly of the Kirk of Scotland in 1650 imploring them to step away from their pledge of allegiance to the royalist cause. His words were 'I beseech you in the bowels of Christ, think it possible that you may be mistaken'. 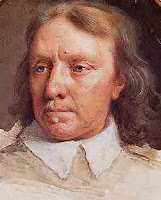 I can see the difficulty for the modern reader of 'the bowels of Christ' although in contemporary usage this was not biological but meant 'the pity or tenderness of Christ'. It is understandable that this part of the phrase should be omitted but I think it is a mistake not to acknowledge Cromwell as its author.

Is it a less powerful phrase if it cannot be truthfully claimed as a Quaker saying? I think not and even if taken out of context it can still give us food for thought. However I hope that in any future edition of Quaker Faith and Practice in which it appears as a well-loved phrase we will give Old Noll his due.
Posted by Gil S at 3:02 pm 2 comments:

Josiah Langdale was born in 1673 at Nafferton in Yorkshire and baptised into the Church of England in August of that year. In 1681 Josiah's father died and, as the eldest and possibly only son, Josiah had to give up his full time education in order to support his family.

He went to work on a farm, caring for livestock and learning how to plough, work which was obviously congenial to his nature. He was proud of his skill and found the solitary nature of the work conducive to religious contemplation. This contemplation was usually about the state of his own soul. In the spiritual autobiograhy which Josiah wrote later in life he confesses his failings and temptations, among them the troubling feelings aroused in him by a violent game of football and by his enjoyment of dancing. He longed to be a better person but found that outward ceremonies, such as confirmation by the bishop and receiving the Lord's Supper, did not have the immediate, amost magical, transforming effect he hoped for.

The second great change in Josiah's life happened in 1688 when he was fifteen and his mother, after seven years as a widow, decided to marry again. She would no longer be dependent on her son and Josiah felt that it was time to leave home. He hired himself out to a farmer as a ploughman, probably at one of the hiring fairs which were held each year throughout the country at this time. Martinmas, November 11th, was the usual date in the north when master and man would mutually agree on a verbal contract which bound them for a year.

Josiah was happy with his first master but when the year ended could not agree on wages so decided to hire himself instead to a Quaker, David Milner, who, with his wife Sarah and their family lived at Carnaby, a village a few miles from Nafferton. Josiah's family and his local priest were very worried that these Quakers might influence or even bewitch him into becoming one of them, but as it turned out the greatest influence on him initially was not Quakerism but another servant of the Milners. Thomas Hewson, a blind thresher about fifteen years older than Josiah, was a self-educated man who had thought deeply about religion but had retained his independence. In him Josiah found an intimate friend and confidant with whom he could explore all his doubts and fears about what was the right way in religion.

It was mainly in order to stay with his friend that Josiah hired himself to David Milner for another year in 1690. When he went home for a visit during the winter of 1690-91 Josiah's relations teased him that he seemed so serious that he was in danger of turning Quaker, but Josiah was only made uncomfortable by such remarks and hurried back to his friend Thomas.

In fact the Milners had been extremely careful not to exert any influence on Josiah or indeed to talk to him about religion at all. Only when Sarah Milner's brother, Timothy Towse, an impetuous young man of twenty five, came for a visit in 1691 and urged Josiah to go to a meeting to hear the well known travelling minister James Dickinson was any pressure put on him. The whole episode was altogether counter-productive too as even though his friend Thomas Hewson went with him and approved of James Dickinson, Josiah was so anxious about the effect the Quaker might have on him that he could derive no benefit from it.

Josiah went on with his spiritual searching, quietly observing and approving the behaviour of the Quakers he
encountered at the fairs and markets he attended as his master's foreman, but it was not until two years later, in May 1693 when he was nineteen, that the greatest change in his life came about. One Sunday David Milner had gone into Bridlington early and later in the day Josiah's mistress Sarah asked him if he would escort her into town and come with her to meeting if he felt he could. This time he was content to go and after sitting in silence for several hours he was moved to tears. He was not derided, as he had been a few years before when the same thing had happened during a church service, but accepted. He knew that he had found what he had been seeking - the people of God with whom he could join.

In a closeknit rural society the change in Josiah did not remain a secret. His mother was told of it and came at once to see for herself. When he met her Josiah felt that he had to be true to his new profession and act on the testimony to plain speech which would mark him out as a Quaker. He therefore addressed her as 'thou', without any of the respectful forms which she would have expected from her son. She was offended and went home, but six weeks later Josiah felt that he should visit his family to try to heal the breach. This time he was better received by his mother and step-father and also by his uncle and aunts. Josiah might have changed his behaviour but they accepted that he was their Josiah still.

When Josiah reached the age of twenty in 1693 the land left to him by his father came into his possession. He was able to be more independent and although still earning his keep as a ploughman could give more of his time to Quaker work. When Josiah became a member of Bridlington meeting (then called Burlington and Keys) it was in the middle of a revival, particularly among the young people. Another Bridlington Quaker, John Richardson, said of it 'Friends grew so in the ministry that it became a proverb that Bridlington was become a school of prophets'. Josiah grew close to other young men such as Timothy Towse, of whom he had initially been so wary, and Thomas Thompson, with whom he later travelled in the ministry.

Josiah felt called to the ministry within a year of his convincment and felt that one day he might be called to visit America. Eventually in 1700, when he was twenty-seven, he fufilled this calling, travelling mainly with Thomas Thompson and remaining abroad for nearly five years. The two young men gave a report of their journey to Yearly Meeting in London in 1705.

About five years later Josiah married Margaret Burton when he was 37 and she was 26. They lived in Bridlington and were both active as ministers, travelling independently when called to do so. In 1715 Josiah travelled to America again with Thomas Thompson. This was a much shorter visit than the first and the pair were sent off by Friends meeting in Philadelphia in June 1716 to return homr by way of the West Indies, which they did in a leisurely fashion, not arriving back until later in the year. While Joseph was away Margaret Langdale had undertaken a religious visit on her own account to Ireland and continued her travels after his return, visiting Europe in 1717 and Wales in 1718.

Josiah, meanwhile, was feeling more and more drawn to move permanently to America. He went again in 1720 and stayed for a year mainly in Philadelphia where he is reported as diligently attending religious meetings. This time though he had not come primarily as a minister and spent most of his time buying land and making arrangements to move his family and himself to the New World. Early in 1723 Josiah, Margaret and their two surviving children, Mary aged ten and John aged eight, set sail for America on the ship London Hope but during the voyage Josiah died at the age of 49.

Margaret had no choice but to contiue on the course they had set themselves. She and her children were welcomed by Philadelphia Friends and she at once embarked on her work as a minister but she could not continue to rely on the charity of Friends so resolved her problems by marrying again. After the accepted mourning period of a year and a day Margaret married Samuel Preston, a useful citizen of Philadelphia and a valuable Friend twenty years her senior. Thomas Chalkley, one of Josiah's old travelling companions was present and reported that  'The meeting was large, and the parable of the virgins and the bridegroom's coming at midnight, was opened'.

In the years that followed Margaret was much occupied as a travelling minister until she died in 1742 aged 58. Her son and daughter both married and settled in America and there are Langdale descendants living there to this day.