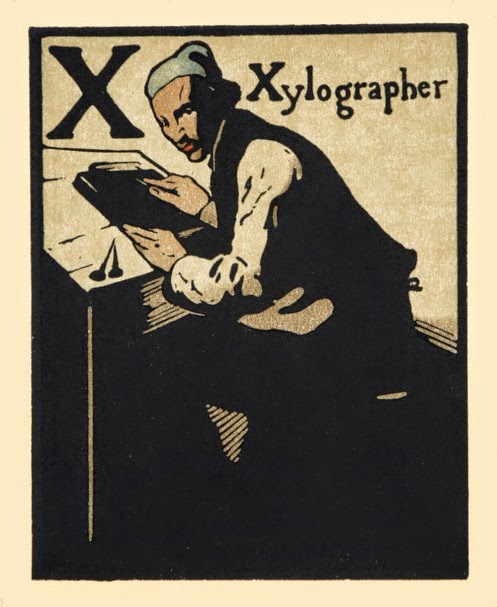 It is the profile picture that I chose for the Quaker Alphabet Blog Facebook page that has inspired this post. Q for Quaker (and X for Xylographer) were both originally woodcuts made in the late 1890s for the first edition of An Illustrated Alphabet by William Nicholson (1872-1949). Xylography is the art of cutting woodblocks for printing and Nicholson's originals were so popular that they were converted to lithographs and printed in bound volumes. Nicholson's style is instantly recognisable, with the broad strokes from his original woodcuts printed with subtle variations of earth tones, harking back to earlier British chap book illustrations. The characterisations of his alphabet are also done in broad strokes with the Q representing an old-fashioned, archetypal Quaker. 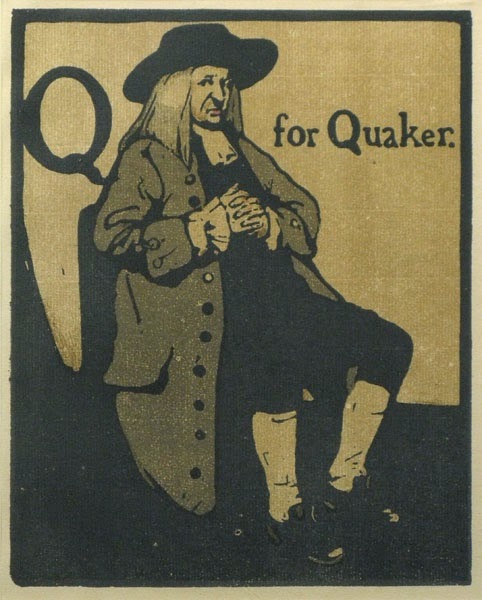 Nicholson was not a Quaker but I have found at least two examples of Quaker xylographers and would be glad to hear of any more.


Fritz Eichenberg (1901-1990) was born in Cologne and trained as an artist, choosing wood engraving as his special medium. With the rise of Hitler, Eichenberg, who came from an assimilated Jewish background, decided he had no future in Germany so in 1933 he managed to get his family out of the country and emigrate to the United States. In 1938 the tragic death of his wife prompted an emotional breakdown but he found solace in his conversion to Quakerism. In the Society of Friends he was attracted by the spirit of simplicity and stillness and the quest for the Peaceable Kingdom.

Another major event in his life was his meeting in 1949 with Dorothy Day, editor of the pacifist Catholic Worker newspaper. By this time Eichenberg had achieved some renown for his illustrations of the Russian classics, a passion for which he shared with Day. There was an instantaneous communion of spirits between the two, and Eichenberg gladly responded to Day’s invitation to contribute his art to her paper. Day felt strongly that images could touch people emotionally and communicate the Catholic Worker spirit to people who, perhaps, could not read the articles. For his part, Eichenberg felt that in this Catholic newspaper, with its emphasis on the works of mercy and the witness for peace, he had found the expression of his own spiritual and moral convictions. He made woodcuts for the paper throughout his life although he always remained a Quaker.

Mary Packer Harris was born in 1891 in Middlesborough in Yorkshire to Quaker parents. She trained as an artist in Edinburgh and graduated from the School of Art there in 1913, going on to take a postgraduate course in woodblock printing under F. Morley Fletcher. Mary taught in Scotland until 1921 when she and her parents travelled to Australia to join her brother who was living in Adelaide. She took up a teaching post at the South Australian School of Arts and Crafts in 1922 and remained there until 1953.


Mary Packer Harris was enthusiastic about all forms of visual arts. In keeping with her Arts and Crafts training, she practiced a wide variety of arts including painting, xylography and other kinds of printing, and also produced printed fabrics, tapestry, stained glass (in the 1930s) and needlework. Mary exhibited for many years with the Royal South Australian Society of Arts (1922-67) and in many other exhibitions. She also wrote and published books on art and Quaker philosophy and edited the Arts and Crafts magazine, The Forerunner.  In her retirement Mary Packer Harris published In One Splendour Spun: Autobiography of a Quaker Artist in 1971. She died at Adelaide on 26 August 1978.

And all this because I was looking for a word beginning with X! 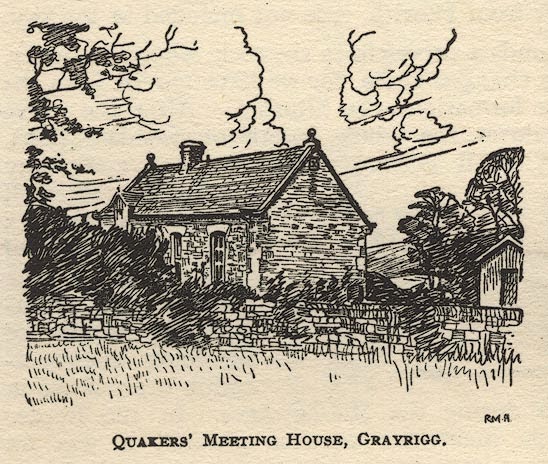 James Wilson was born in 1677 in Kirby Lonsdale, Westmoreland. His father owned a 'tolerable estate' and James was brought up in the Church of England. However from his youth he was dissatisfied with what he had been taught and searched for what he called 'real religion'. He read the Bible, especially the New Testament, but eventually found what he was looking for among the Quakers.

After he was convinced James married Sarah Gardener in 1704 and they became members of Grayrigg Meeting. As well as their own numerous family they took in others including John and Samuel Fothergill who stayed with the Wilsons while attending school in Sedbergh. Later Samuel recalled that James 'discharged the office of a father to me in my minority with a father's regard and tenderness.'

When James was in her thirtieth year he became a Quaker minister and began to travel, at first locally and then farther afield. He visited Scotland and in 1714 went to Ireland. He also frequently attended Yearly Meeting in London, Wales and elsewhere.

He was not prominent nationally and wrote no journal of his travels, but he was much valued by those who knew him. His family connections with those of high rank in the district were useful to local Friends and he was of great service in settling disputes among his neighbours.

James Wilson was a good friend and neighbour as surviving letters to and from him testify. He gave good advice and encouragement, acted as a listening ear, sympathised with his friends' hardships and rejoiced with their joys. Lydia Lancaster writes to him in 1755 'with much thankfulness that I had such a friend as thee, to open my mind to and pour out my complaints...wherein thy wise counsel and tender, fatherly sympathy was a great strength to me, a poor distressed creature'. Samuel Bownas corresponded with him as a fellow minister when he was concerned about the state of Quakerism.

His old age brought much pain and infirmity but his memory and understanding did not leave him. James Wilson had outlived all his nine children and all but two of his grandchildren when he died at his home in Kendal at the end of 1769 at the age of 92.
Posted by Gil S at 11:40 am No comments: Links to this post 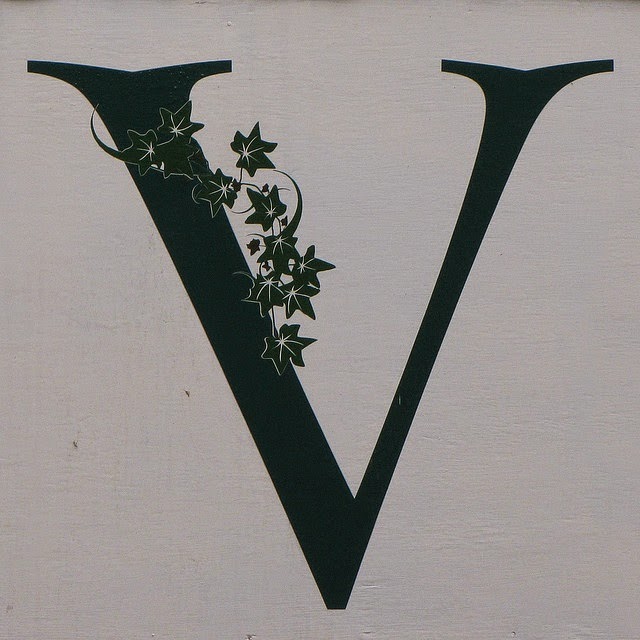 How much variety (or diversity) is there among Quakers in the UK and worldwide, and is it a good thing? This is one of the questions being discussed at the moment on the Facebook group Quaker Renewal UK in a very wide-ranging and (on the whole) good-tempered way.

It is obvious that Quakers in Britain Yearly Meeting now have a much wider variety of spiritual experience and belief than has been the case in the past. This variety is beginning to echo the variety  among Quakers worldwide, of which Friends in the UK have often remained unconscious. Different Quaker traditions, with their labels of Liberal, Evangelical, Conservative etc., have in the past led to splits and schisms and this can still happen. However if we can manage to remain open, to really listen to the hearts, lives and experience of other Friends as well as to their (often difficult) words, then variety can be embraced while we still retain our differences.

The variety of life experience encountered among Friends in Britain may be less evident. The vast majority of us are well educated, white, getting on in years, comfortably situated. This perceived lack of variety can be off-putting to those who feel themselves to be different from the status quo. Do Quakers as a group welcome 'people like us' while often unconsciously rejecting the 'awkward squad'? Even if we are insiders in some ways, do we stay silent about aspects of ourselves which might make others feel uncomfortable?

I became a Quaker because of what I found in Meeting for Worship and that experience, with all its variety, is still a sure foundation for my life and faith. From that foundation I have slowly learned to value the variety of people who I worship with. Living in community with Quakers in my local meeting, my area meeting, my Yearly Meeting and in other groups, both face to face and online, has been a valuable but often difficult path to tread. For me it has been about learning to listen to and learning to love a wide variety of sometimes inspiring, sometimes infuriating Friends. It is a continuing journey on which I sometimes take one step forward and two steps back but I know that it is worth my perseverance.
Posted by Gil S at 3:28 pm No comments: Links to this post