Undercliffe House was the home of John and Christiana Hustler of Bradford and their family. John was born in 1715 to Quaker parents in Bolton. His father was a farmer but also a wool merchant and John served an apprenticeship as a woolsorter and stapler. The family business flourished during the 1740s and John was very active as a merchant in Bradford, dealing not only in wool and worsted cloth but in coal, some from his own mines. He became very prosperous and lived at Bolton Hall, part of whose grounds became what is now Peel Park.

In 1763, when he was 48 years old and well established, John married Christiana Hird, aged 31, a minister and the daughter of another prosperous Quaker. They moved into Undercliffe House which John had built in a healthier situation than Bolton Hall, further up the hill above the city. It was a large establishment and Christiana made it a home for their six children and a place of hospitality for many visiting Quaker travelling ministers. 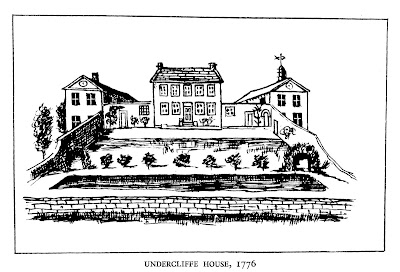 John was very influential in transforming Bradford into a modern city. He was a prime mover in opening out Bradford centre, building the Piece Hall and suggesting the construction of New (now Market) Street. In modern times his contribution was recognised by naming a street, Hustlergate, after him. He was also a leading promoter of the Leeds and Liverpool and later the Bradford canals, known at that time as 'the navigation'.

This business often took him to London where, according to one fellow visitor to Dr Fothergill's house, he could talk of nothing else. Betsy Fothergill confided to her diary '[we were] entertained in the manner I expected - the course of rivers, the situation of hills, etc etc - and in short, "the Navigation" spun out into its different branches, was the continued subject. It is a common maxim that extremes can never last but J Hustler is an exception to this general rule, for he has continued the pursuit of this favourite scheme for near two years past, with an ardour that rather strengthens than declines.'

While John travelled on business Christiana remained at Undercliffe and dispensed generous hospitality to Quaker  visitors. Joseph Wood came to stay the night in 1774 and says 'John was gone from home but his Wife was remarkable, open, free, so that we spent the evening very agreeably together, and she having just received a Letter from her brother Benjamin Hird who was then on a religious visit to friends in Scotland was so kind as to read it to me which was very comfortable...'

As her children grew Christiana felt free to travel in the ministry not only locally but further afield. In the 1780s Christiana accompanied Rebecca Jones on her travels around the country but they often returned to Undercliffe for periods of rest and recuperation. In 1788 on her return to America Rebecca fondly remembered 'that hospitable retreat called Undercliffe, where I have been often received, kindly cared for and tenderly treated, far beyond my deserts.'

John died in 1790 and Christiana in 1811 and they were both buried in the Quaker burial ground in the city centre. Undercliffe passed to their sons but eventually the house was demolished and the estate sold. In 1851, as part of a national campaign to remove graveyards from city centres where they were becoming a health hazard, 26 acres of the estate were acquired by the Bradford Cemetery Company and Undercliffe Cemetery was established.
The cemetery was divided between anglicans and non-conformists and was run as a commercial enterprise. The first interment took place in 1854 and then in 1855 an Order in Council closed many of the overcrowded central burial grounds, including the old Quaker graveyard. The Society of Friends purchased a small section at the back of the newly opened cemetery and re-interred the disturbed remains, including those of John and Christiana Hustler, in one large grave. This and subsequent graves were marked with uniform stones laid flat on the ground, a contrast to the many lofty and elaborate monuments surrounding them.