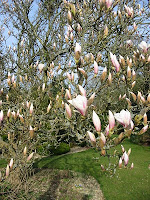 Spring is here and the magnolias are coming into bud, just waiting to burst into flower. I love the shape of the buds in this stage and have taken plenty of photographs of them, like this one of the Hillier garden near Lymington.


Looking at them again today though I was reminded, as I always am, not of the last time I looked at the real thing, nor of a photograph, but of a painting. This particular painting hung on a classroom wall in my secondary school, so I must have first encountered it when I was ten or eleven years old. It was of a magnolia tree full of pink flowers, mainly in bud but with some coming into full bloom. The bare branches and upright flowers were set against a perfectly blue sky. There may have been a wall in the background but it is the contrast between blue and pink that I remember. Sadly I do not remember the artist and have scoured Google Images in vain!
﻿
﻿

Looking at pictures has always been important to me, beginning with illustrations in books. My memory of those illustrations is more than visual, sometimes I can almost taste them, as if the child that I was used all her senses to register and remember those images. I remember nothing of the words of the various Flower Fairies books by Cicely Mary Barker but I vividly remember the illustrations. 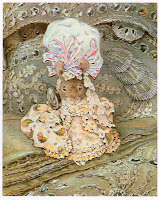 I also loved the detail of Beatrix Potter's illustrations especially all the clothes in the Tailor of Gloucester. 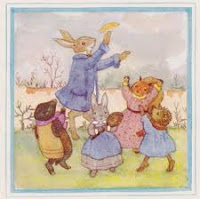 I was particularly fond too of Margaret Tempest's illustrations for Alison Uttley's series about Little Gray Rabbit and I imagined being inside the house in the wood which appeared on every endpaper, even though it was in black and white. 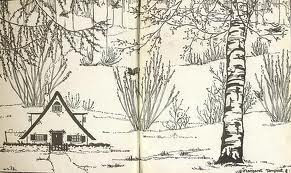 From illustrations in books I graduated to the sheets of art reproductions which were issued as a series by the periodical Child Education and collected by my mother, a primary school teacher. She kept them between cardboard covers under a bed at home and every so often I was allowed to get them out and look through them. This must have been at about the same time as I was looking at the painting of the magnolias at school. The series was full of Victorian classics, many in sepia, but I still remember them with the same intensity as I do the illustrations in books.﻿﻿﻿﻿﻿﻿﻿﻿﻿
﻿﻿

I also remember the thrill, many years later, of visiting the Lady Lever Gallery at Port Sunlight near Liverpool and seeing so many of my favourites on the walls and in full colour!
﻿
﻿

For almost all of my life Art and Nature, the one complementing the other, have both fed my spirit with an intensity which roots me in the present while at the same time bringing back memories of the past. Long may they continue to do so!
﻿
﻿

How many friends do I have? Quite a few I think, although I had never been in the habit of counting them until I went on Facebook. That was a few years ago when I wanted a way of tracking the progress of my globe-trotting sons but also wanted to prove my husband wrong when he said I had no friends.

I have never been one to have crowds of close friends. I grew up as a happily solitary only child, isolated further at primary school by the fact that my father was also my headmaster. My parents tried to remedy this situation when I changed schools by sending me to an establishment in a different town, rather than to the grammer school next door to my father's new school. I made a few close friends there but it was difficult to cultivate friendships outside school because of the distance involved.

However, when I make good friends I do try to keep them and am still in touch with two women I have known since I was 10, Fleur and Liz. At university, first in Oxford and then in Birmingham, I made more close friends and have kept up sporadically with a few of them. At Oxford I also met my closest friend, Chris, and eventually married him. I also acquired some of his friends too. I have made friends at work, some closer than others. I have also made friends of Friends in many different contexts, often by working and sometimes struggling together.

What do I mean by a friend? Well for me friendship involves sharing, giving and receiving confidences, honesty and loyal support. It is also about having things in common - a place, a way of life, even a favourite television programme - but not necessarily about always agreeing with each other. A valuable part of friendship for me is the ability to speak and hear uncomfortable things from time to time, although I admit that I almost lost one friendship through being afraid of confrontation.

But is it possible to have virtual friendships, only conducted online and never face to face? I think it is and I have discovered this through reading and writing blogs and through Facebook. Many of the bloggers I read are not known to me in person although we have a friendly relationship online. After all, I can hold a conversation with them through comments as they can with me and blogging is often about sharing one's life as one would with friends in the 'real' world.

At the last count I had 264 Facebook friends. Many of them I know personally and meet quite frequently, others I have met a few times, but some I only know online. Quite a few live in different countries which makes meeting face to face even more difficult. I am very grateful for the opportunity Facebook gives me to connect a little with all their lives. Then there are the reconnections, people I have known but may have lost touch with until an unexpected 'friend request' appears.

The other week I visited my friend James in Leeds. I met him in Birmingham 40 odd (sometimes very odd) years ago and we were close friends and housemates then. I had kept in touch sporadically and went to all three of his weddings but Facebook allowed us to connect on a more day to day level which made our face to face meeting more comfortable. I look forward to deepening this friendship when we eventually move Up North.

I know what Chris meant when he said I did not have any friends. At the time I was in danger of isolating myself from the day to day contact that nourishes friendship. I hope that I am working towards correcting that and Facebook and blogging have helped me keep in touch, not only with friends but with myself.
Posted by Gil S at 12:15 pm No comments: Links to this post