Robert Davidson was born in 1864, the eldest of the six surviving sons of Adam and Mary Davidson of Hillsborough, near Lisburn in Northern Ireland.

Robert's father had served as a soldier in China but had found himself unable to continue to subdue the heathen rather than reach out to them as fellow human beings. He declared himself a pacifist, was discharged from the army and sent back to Ireland where he became a Quaker. He supported his family by opening a grocery shop but also held mission meetings to which people flocked from miles around. Adam wanted to go back to China but bad health and lack of education prevented him so he urged his eldest son to go in his place. 'Go to China', he told Robert, 'and as you meet the Chinese tell them that you come with the Bible and not with a gun, as I mistakenly did.'

Robert was educated at the Friends School in Lisburn until he was fourteen when lack of money forced him to leave and earn his living in a linen factory. His father's words had given him a goal however and when he was nineteen he wrote to the Friends Foreign Mission Association (FFMA) in London asking them to send him to China as a missionary. Friends were hesitant about sending someone so young, uneducated and inexperienced on such a hazardous posting but Robert was insistent and persuaded Henry Stanley Newman of FFMA to visit his father. Henry was impressed and when Adam died in 1885 it was in the knowledge that his son had been accepted for service.

Robert came to London for his training in mission work, an ad hoc course of study designed to fill the gaps in his general education and to give him a basic knowledge of theology, church history, book-keeping and carpentry as well as a three-month elementary medical course. He spent his evenings at the Friends Mission Hall in Hart's Lane in Bethnal Green where his temperamental suitability for mission work could be tested and he threw himself into this with vigour.

It was also at Hart's Lane that Robert met one of the senior workers Mary Jane Catlin. Ever since she was a child Mary Jane had wanted to go overseas as a Quaker missionary. Remaining at home to look after her invalid mother, she threw her considerable energies into any opportunity for service that came her way. She started adult schools and self-help societies for the London poor, set up and ran convalescent and childen's homes at the seaside at Folkestone and Worthing and qualified as a nurse. At the same time she acted as secretary for innumerable Quaker committees. She later said that during those years she was known for her bag, her bonnet and her Bible.

In spite of the age difference between them Robert and Mary Jane's shared interests and enthusiam brought them together and in July 1886, when he was 22 and she was 39, they married and in September set out together for China.

Eventually they made their way to Szechwan, West China where they arrived in May 1887. They made the hazardous journey from Shanghai 1000 miles up the Yangtze River to Ichang and then 500 miles through the gorges, the boats pulled by trackers with bamboo rope. They studied the Chinese language and customs and developed the Friends Mission against considerable odds through medical and educational as well as evangelistic work. Mary Jane used her nursing and midwifery skills as well as her organisational and administrative abilities to assist Robert and to work herself among Chinese women. They had one son, Robert, known as Robin, born in 1889.

As Quaker missionaries Robert and Mary Jane were allowed to return to Britain from time to time on furlough but it was not until late 1894 that they and their son managed to do this for the first time. They stayed for nearly two years, resting and visiting friends and family but also making direct contact with the China Committee of FFMA and speaking at Quaker meetings throuhout Britain and Ireland. They put on exhibitions of Chinese artefacts and sometimes dressed in Chinese costume. Six-year-old Robin also played a part, demonstrating how to eat with chopsticks and reciting a prayer in Chinese. Before they returned to China Robert and Mary Jane visited the Horniman Museum and talked to Frederick Horniman, himself a Quaker, who bought more than 300 items from their collection which remain in the museum to this day.
As well as drumming up support for the mission in money and prayers Robert and Mary Jane also hoped for missionary recruits but in this their success was limited. In fact their greatest success was in recruiting their own family, with Robert's brother Warburton arriving in 1898 followed by two more brothers, Alfred and Henry in 1901. In time Robin Davidson brought his bride to China and they too became part of the mission.

In January 1918 Mary Jane died suddenly and unexpectedly of pneumonia at the age of 70. Her daughter-in-law Kathleen wrote, 'There is no fearfulness, no ugliness, no horror in her death. She was wonderful. The order of her house, her accounts, and all she possessed surpasses anything I ever thought of. She must have always been prepared to go.'

Four years later Robert married an American colleague, Pearl Page. In his later years he became a lecturer at the West China Union University which he and his brothers had helped to found. When he retired in 1925 he was asked to take on the headmastership of the Friends School in Brummana, Lebanon, where he stayed for five years.

In 1932 Robert finally retired and settled on the south coast of England in Bournemouth, where his meeting much appreciated his help with young people and his service as an elder. He was far from idle, taking on the secretaryship of the Christian Universities in China Council and of the China Committee of Friends Service Council (which had taken over the work of FFMA). Although his health prevented him from taking up the many invitations he received to return to China he attended many international meetings and it was while he was at one of these in California that Robert died of heart failure at the age of seventy-eight.

Waste Not, Want Not 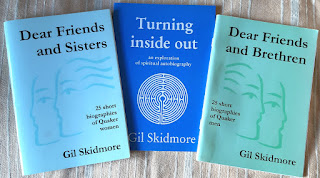 This weekend I am spending time at the annual conference of QUIP (Quakers Uniting in Publications) as I have often done in the past. It is different this time of course as rather than travelling sometimes long distances to greet each other in person, we are seeing one another's faces on Zoom. I used to be much more involved in the running of the group than I am now so in some ways I feel more of a spectator than a participant but it is still good to connect with friends from all over the world and to meet new people too, even if only virtually.

Although I have not been writing my blog for the last year or two I have still been writing, particularly in my diary, and thinking about where to go next. I have come to a point now where I want to continue my research into Quaker history and into spiritual autobiography and life writing more generally. In order to go forward I will need to take stock, to look at what I have done and what there is still to do, to see what I can recycle and reuse from my past writings and research notes and where there are gaps I need to fill.

I joined QUIP as a publisher and 25 years ago Sowle Press (the desk-top publishing enterprise which I ran with my husband Chris) produced a book on spiritual autobiography, Turning Inside Out, based on my experience as a Joseph Rowntree Quaker Fellow. Following this I wrote and we published two collections of short biographies of Quakers through the ages - Dear Friends and Sisters (1998) and Dear Friends and Brethren (2000). I was asked about Dear Friends and Sisters at the conference yesterday but had to report that we have no stock left.

I continue to be a member of QUIP as a writer and there is a crossover in this blog between publishing and writing. I have written quite a lot of Quaker biographies here and many of them are based on pieces from Sisters and Brethren, often added to from further research. In the future I intend to continue this process and to share my researches in other ways. I do not want the work I have done and will do to be wasted so I need to remember the wise words of the historian Barbara Tuchman, 'Research is endlessly seductive; writing is hard work'.

I value my continuing connection with QUIP and the inspiration and practical help that I have received and still receive from the organisation and its members. I look forward to the rest of the conference and to conferences to come - perhaps not all of them virtual.

Easter seems like a good time to try to put some new life into this blog again. I have written nothing for nearly two years but recently I had occasion to look back at my posts and wonder whether I could make another attempt to continue.

While many people began to write blogs and share their thoughts during the pandemic I went back to my handwritten diary and wrote much more regularly, almost daily, there. I have also spent much more time on social media, sharing daily art from my Pinterest boards on Facebook and expanding my use of Twitter to include more art, humour and even virtual friends.

The isolation of the past year has, in some ways, been easier for me than for many others. I have not been alone and my husband, the driver, has been the one to make forays into the outside world. As we are both retired we have not had any work worries as we are used to working from home on our various projects. We have adapted our routines to include many more deliveries than before and also Zoom meeetings of various kinds. We have also been able (when restrictions allowed) to see family and friends outside in various locations.

I have wondered why I did not include blog writing in my altered routine but can find no convincing answer except that I have always struggled to keep writing here and the uncertainty and fear underlying everything this last year did not improve my tendency to procrastinate!

As the seasons turn however I have found a new resolve to look again at my research into 18th century Quakers, particularly Catherine Payton Phillips, to identify gaps and fill them where I can and to do some writing with a view to publication in some form. I hope that writing here will help with that and that sharing what I write will also be of some use, both to myself and to others.

So here I go, making yet another new start. I hope to find companions on the way.