For a group so concerned with simplicity and plainness, Quakers have been surprisingly concerned about their image over the years. Friends could be disowned if they acted in ways that were perceived as bringing the reputation of the Society of Friends into disrepute. Friends' testimony for simplicity meant that they were not supposed to pay too much attention to how they looked or to fashion but in practice this led to a kind of uniformity, a 'Quaker grey' that was increasingly policed. Quakers dressed, spoke and acted in ways that set them apart from the rest of Society and to outsiders they sometimes appeared intimidatingly serious and lacking any sense of humour. 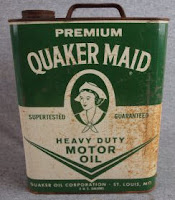 Of course one of the most iconic Quaker images, the Quaker Oats man, has absolutely no connection with the Religious Society of Friends. He was created to embody the perceived honesty and straightforwardness of Quakers and to associate these qualities with the products he advertised. The first image used is reminiscent of portraits of William Penn but the latest incarnation is jolly and smiling - not the older image of a Quaker at all.There are other examples of this advertising association, such as Quaker Maid motor oil which uses the image of a demure young girl in a Quaker cap to tell buyers that their product is pure.

Nowadays the image of a Quaker is often that of a campaigner for peace, equality or the environment. Quakers are seen as 'good people' if perhaps rather naive. I worry about the condescension of this view and would rather ally myself with the message of the recent outreach posters produced for Quaker Week in the UK - here are a wide range of people who are all Quakers whether they fit the Quaker image or not!

Lucy Violet Hodgkin came from a long line of Quaker ancestors. She was born in 1869 in Northumberland, the eldest of the six children of Thomas and Lucy Fox Hodgkin. Her father was a prominent Friend, co-founder of the Quaker bank of Hodgkin, Barnett, Pease and Spence, later amalgamated with Lloyds Bank, and an eminent historian. Lucy Violet was her father’s favourite and shared his love of literature. As she said later, 'He and I lived our real life in the book world.' By the age of ten she was reading his proofs and seemed much older than her brothers and sisters. Her sister Lily wrote, 'In one way Violet was like an only child, it was "Violet and the children" always.'


When she was eleven Violet had a bout of scarlet fever which left her with increasing deafness. Cures were sought but in vain and by 1895 she had no hearing at all. Although she had episodes of despair she learned to lip-read very well and spoke out clearly. Her whole manner was regal and this was accentuated by her commanding stature and by the large hats and long dresses that she always wore.

Violet was educated at home and remained there as a companion to her parents who were very protective of her. In 1894 her engagement to Malcolm Powell was broken off as a result of family pressure. They felt that someone who, although charming, was also mentally unstable was not the right husband for Violet, but she did not forget her first love. When, ten years later, he married someone else she noted in her diary, ‘Wednesday 11 May 1904, Malcolm’s wedding day and not mine.’

The Hodgkin family were wealthy and often travelled in Europe but in 1909 they undertook a longer voyage ‘under concern’ to Australia and New Zealand. In New Zealand they stayed with John Holdsworth and his wife Margaret at their house 'Swarthmoor'. Violet was deeply affected by her experience there of silent worship in an ecumenical atmosphere at meetings held at the Church in Havelock North by a group which included Friends, Theosophists and the Anglican minister.

Like many birthright Friends Violet felt that she had become involved in Quakerism without making a conscious choice and in New Zealand she found a setting for the more mystical spiritual expression that she was reaching for. When she returned to England she pursued this side of her faith and was eventually recorded as a minister in 1915. Throughout the years her ministry was marked by a catholic spirit and by directness, simplicity and depth. In 1919 she gave the Swarthmore lecture on Silent Worship; the way of wonder.

In 1913 the Hodgkin family moved from Northumberland to Cornwall but very soon after they had done so Thomas Hodgkin died. Violet felt his loss very keenly, as she also did that of her favourite brother George who died of dysentery while engaged in relief work in Armenia in 1918. She found consolation in her work as a writer and began to publish historical and religious subjects. Her retelling of Quaker stories for young people A Book of Quaker Saints was published in 1917 and many other books and articles followed.

Writing was one way in which Violet could communicate and counter her deafness. Another way was through art. She was an avid watercolour painter, making opportunities everywhere she went to settle down to sketching, complete with umbrella, easel and stool. She would sometimes give ‘sketch shows’, displaying her paintings and talking about them.

In 1922 New Zealand came back into Violet’s life in the shape of John Holdsworth who was on a visit to England. His wife had died in 1920 and the friendship between him and Violet soon developed to the point where they decided to marry. He was 72 and she was 55 when the wedding took place in Cornwall. The couple went back to New Zealand but Violet was not used to running a household without servants and had to learn even how to boil and egg. She was made welcome by John’s daughter Beatrice but felt uncomfortable taking the place of John’s first wife in her own home. Eventually, after several voyages back and forth, John and Violet settled in England for good in 1928.

Violet enjoyed the companionship of her husband and of her growing family of nieces and nephews. After John died in 1935 her quiet life continued, welcoming guests to her beautiful home near Falmouth and maintaining contact with a wide circle of Friends through a correspondence which grew year by year. She also continued writing into her eighties, meaning to ‘retire’ and then finding another subject to absorb her. One of her nephews remembers how important ‘the book world’ was still for her. 'Her drawing room was always full of new books including review copies. She would introduce you to them like guests at a party, with an affectionate pat for the good ones and a noise of disgust for bad ones.'

Lucy Violet Hodgkin Holdsworth led the life of the mind that her father had introduced her to, but also found affection and happiness when she had ceased to look for it. Her deafness closed some doors to her but opened others and she always welcomed new experiences and people into her life. She died in Cornwall in 1954 at the age of 85.
Posted by Gil S at 2:49 pm No comments:

The subject of home has been much on my mind lately as we have gone through the tortuous and exhausting process of moving from one house to another in towns hundreds of miles apart. We are down-sizing (a bit) and although we have disposed of quite a lot of things one way and another, we still have a lot of ‘stuff’.

However I realised as I stood in our newly empty house, about to hand over the keys and title to it to someone else, that a lot of what felt like ‘home’ to me was bound up with this ‘stuff’.  Much of this has to do with memory, of books and furniture and ornaments passed down from parents and grandparents and from friends, and of pictures and things chosen and made my own. In the new house these things have yet to find their places and some will no doubt in time find a new home with other people. It will take a while for me to feel ‘at home’ in these new surroundings.


But of course home is not just a house with things in it. It is about the people who live there and visit it as well. I have always found section 26 of Advices and Queries on the subject of a Quaker home rather intimidating. ‘Try to make your home a place of loving friendship and enjoyment, where all who live or visit may find the peace and refreshment of God’s presence.’  My home has sometimes been a place of noise and conflict, although always grounded in love and therefore not without that divine presence that never despairs.


In our new house we will be nearer to two of our three children and to our grandchildren. This was an important part of our reason for moving and I hope we can make our home a welcoming place for all of them as well as for friends both old and new.  Above all I hope that everyone who comes here will find a piece of home for themselves – if not always peace and quiet! 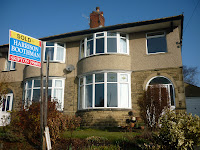 In the early days of Quakerism Friends were buried in separate Quaker graveyards in unmarked graves so that there should be no distinction between rich and poor.

Of course not everyone found it easy to forswear a memorial for their loved ones and Quaker minute books record the ways in which different meetings dealt with the problem. For example in Norwich the first formal request for a gravestone was made in 1692, when 'the sense of the Meeting was wholly against it and that for the future, none be permitted to set up any'. However the minute goes on to say that Friends will endeavour to persuade those who have set up any to remove them. Some could not be persuaded, such as Anne Byars who set up a table tombstone for her husband's grave. There is a series of minutes from which it is clear that they tried several times, but each time had to report failure. Finally in the 1720s, there is reference to the fact that she now shares the same stone and this minute has a distinct note of resignation. There is at least one other example of a table tomb that I know of, at Farfield in Yorkshire.

The question of whether or not to allow gravestones rumbled on until Yearly Meeting of 1850 which agreed that they were permissable so long as they were plain in design and contained only the name of the deceased, his or her age and the date of death. As burial grounds are under the care of each area meeting consistency is only asked for within each graveyard. Sometimes the stones are laid flat, sometimes upright and the lettering can be in a variety of configurations.

I have spent a lot of time in Quaker graveyards up and down the country and I have always found them places of peace and contemplation in which I have felt close to my Quaker foremothers and forefathers. As William G Sewell put it in Quaker Faith & Practice 10.08 'The gravestones speak of the past, of those who also served the meeting, whose lives are woven into ours, as ours will affect those still to come.'