It is getting on for ten years ago that I started writing on this blog about Quakers in the past. I kept myself going with several Quaker alphabets and now I am continuing with this occasional series. I began with Grace Hall Chamber and I shall continue with one of her friends, Lydia Rawlinson Lancaster.

Lydia was born in 1683 at Graithwaite in Lancashire, near Lake Windermere, the seventh of the eight children of Thomas Rawlinson and his wife Dorothy, born Hutton. Brought up in a Quaker family, Lydia describes herself as one drawn to thoughts of God from infancy. Her father died when she was six and around this time she remembered being moved to floods of tears by the ministry of a visiting Friend. From the age of fourteen Lydia struggled with the conviction that she was being called to be a minister herself. She resisted this calling for ten years - a period which her contemporaries saw approvingly as a time when she grew in wisdom and experience but which she remembered as a 'long howling wilderness' of unfaithfulness.

Soon after the beginning of her ministry, in 1708, Lydia began to travel, at first to local meetings and then in 1710 as far as London. In 1712 she went to Ireland, in 1717 to Scotland and from 1718 to 1719 she visited America in the company of her brother Abraham’s wife, Elizabeth Beck Rawlinson (1670-1750). Lydia’s travels, although undertaken under a sense of religious duty, were however, as she says herself, '...sometimes pretty trying, not having such care taken at home in my absence as might have been desired.' She had married, in January 1707, Bryan Lancaster, a tanner of Kendal, when she was 23 and he was 20. There were no children of the marriage and there are hints in contemporary records of sorrows and affliction, some of it possibly financial, brought upon Lydia by her 'nearest temporal connexion', her husband.

In 1729 Lydia moved with her aged mother to Colthouse, near Hawkshead, a small rural settlement next to a Quaker Meeting House, but there is no mention of her husband on the removal certificate. Her mother died in 1737 aged 93 and by 1743 Lydia was evidently living at Colthouse with her husband. Bryan Lancaster died in 1747 aged 60.

Lydia’s ministry was generally acknowledged to be expressive and powerful, but her experience gave her another dimension for, as was said by her fellow Quakers, 'being instructed in sorrow she was favoured with a sympathizing heart and knew how to partake in the affliction of others'.

Throughout her ministry Lydia was a staunch supporter of  Quaker Womens Meetings for business at a local level. In 1746 she also put her name to a petition aimed at extending them to a national level, although this was not accepted and the Womens Yearly Meeting was not set up until 1784. Lydia was not concerned with the equality of women as such but wanted them to be encouraged to take up their religious duties as much as the men were. In her local meetings Lydia, drawing on her own experience, was both stern and encouraging 'particularly to the timorous and backward'. She was remembered for always bidding farewell to those women who made the effort to come to womens meetings with a sort of blessing, and she continued to attend  meetings herself right up to her last days.

At the end of her life Lydia lived in Lancaster, free from financial worries and, she says in a letter to her friend James Wilson, 'mostly alone, for that is what I most delight in and have done most of my time'. She still travelled in the ministry, taking long journeys in 1749 and 1754. In 1760 she and Grace Chamber, at the end of both their lives but 'green in old age', travelled together to Welsh Yearly Meeting, Bath, Bristol and London. 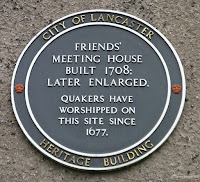 Lydia died in 1761 at the age of 78 at Lancaster and was buried in the Friends burial ground there. Lydia published nothing in her lifetime but her influence continued. Many years after her death, in 1840, her descendant and namesake, Lydia Ann Barclay, edited and published a selection of extracts from her letters, feeling that they might be of use to future generations.

Posted by Gil S at 4:07 pm No comments: Links to this post

It is nearly a year since I last wrote this blog but now seems a good time to start again. The title of this post is Quaker terminology for what happens when a piece of work comes to an end. It is laid down and the group or committee which has been carrying it on ceases to exist.

A long-standing committee on which I have served for just over a year and clerked since the beginning of 2018 has just been laid down by the central committee in charge of it. The reason for this is unclear and communication throughout could have been better but the decision has been made and the committee has been wound up. When we realised what was happening the committee wrote a minute and tried to change the central committee's mind as we did not think that our work was at an end, but this was in vain. It appears that an alternative approach is being sought but our committee has been laid down.

Under Quaker discipline of course I accept this decision but I have been wrestling with the way it has made me feel. I cannot help feeling rejected and a failure even though rationally I know that this was not the intention of the central committee.

In my working life I have been made redundant twice and both times I knew it was not my fault. In one instance the redundancy arose from a change of policy and in the other my job was tied to that of someone who the organisation wanted to dismiss. On both occasions I felt shock, rejection and a sense of failure that took a long time to work through.

Is there a difference between a committee or people engaged on a particular piece of work deciding that they have come to a stop and therefore laying themselves or the work down and having that work taken from them or laid down by another body? I think it is obvious that there is a difference. Recognising that an end has been reached is a way of taking control of the situation rather than having a decision imposed - even if the reasons for that decision are valid. I wish that there had been a way of helping our committee to understand and take a greater part in the decision that was made.

It has been hard but writing this post has helped me to continue the process of reconciling myself to the situation as it is. I am taking advantage of the time and space I have been given and welcome the opportunity to go back to my research and writing. I am sure that a way will open if I am attentive to my Inward Teacher. As I lay down one set of responsibilities I am taking up this blog again and hope to write regularly, at least once a month, on Quaker history and other matters that I need to explore in writing.