Mary Alexander was born on February 7th 1760 at Needham Market, Suffolk, the third of the eight children of Dykes Alexander, a shopkeeper and mealman, and his wife Martha Biddle, of whom five survived childhood. Both her parents were established Quakers, her father being an elder and her mother a minister. Mary was fifteen when her mother died and was conscious of the possibility that she too might be called to the ministry, a calling for which she tried to prepare herself.

Mary lived quietly at home, caring for her father, but in 1786 he died, aged 62, and this blow was followed only nine weeks later by the death of her eldest brother Samuel’s wife, Elizabeth. The family agreed that Mary should continue to live in her father’s house with her youngest brother William, who at the age of 18 took on his father's business, while Samuel and his four children were looked after by his wife’s aunt, Mary Gurney.

Mary Alexander struggled between her call to the ministry and her family obligations, especially after Mary Gurney also died in 1788. However confirmation of her calling came one night in 1789 when, she says, 'a light shone round my bed and I heard a voice intelligibly say “Thou art appointed to preach the Gospel”'. Mary first spoke in meeting in July 1789 and was formally recognised as a Quaker minister in 1791.

Mary’s first journeys as a minister were mainly local but in 1794 she ventured further afield to Lincoln where she met and travelled with another minister, seven years younger than herself. Ann Tuke, was the daughter of William and Esther Tuke of York and became a close friend. Their friendship developed further when Ann married Mary’s brother William in September 1796. William and Ann asked Mary to live with them in the family home but she decided to find a house nearby instead. A ministerial journey in 1797 with Ann and William to Wales was continually interrupted by Mary’s illnesses. She struggled on but at Cirencester felt close to death. She dreamed that she was dead, but was sent back to life as her time had not yet come.

Eventually at the beginning of 1798 Mary returned to Needham Market and moved into her own 'very peaceful home', but her ministerial obligations gave her little time to enjoy it. She travelled extensively with Elizabeth Coggeshall of Newport, Rhode Island, returning home at the end of 1800. For the next few years most of Mary’s travels were in her own area. She also acted as 'an affectionate nurse and attendant' to her sister-in-law Hannah, the wife of her younger brother Dykes, at the birth of their daughter, but the experience depressed her.

1808 brought another change in Mary’s life when her brother William and his family were forced to make a move as the family business was failing. They went to York where they were helped by Ann's family and William eventually became a successful bookseller and publisher. Mary found this 'a closely trying separation'. At the end of October 1809 Mary went, with her older sister Martha Jesup, on a religious visit to Friends’ families in Worcester. There she was joined by another minister, William Forster, with whom she attended two crowded public meetings. She was obviously ill and as soon as she had done her duty went  back to Worcester to the care of her relation Thomas Burlingham.

At first Mary’s illness was thought to be another attack of the bilious complaint from which she had often suffered before, but it soon became obvious that she had contracted smallpox and she gradually grew worse. Her brothers Samuel and Dykes were sent for and she died surrounded by her family on December 4th 1809 at the age of 49.

Her brother William could not be with her, but he made sure that her account of her spiritual life was published two years later. 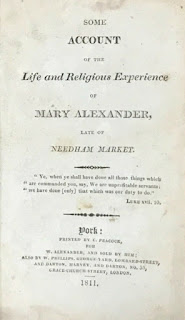