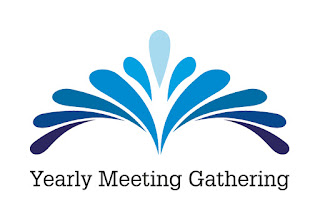 Back in 2013 I wrote a post about my experience of Yearly Meeting and as I said then I have been a regular attender for many years.

London (later Britain) Yearly Meeting has usually been held in London but in modern times there have been moves to change this. In 1905 London Yearly Meeting was held in Leeds and there were other occasional forays out of the capital - to Birmingham in 1908, Manchester in 1912 and 1926, Llandrindod Wells in 1924, Scarborough in 1925, Bristol in 1937, York in 1941 and 1942 and Edinburgh in 1948.

It was intended that Yearly Meeting should be held in the summer every four years outside London and a minute was made to that effect in 1945. However the organisation of these 'Residential Yearly Meetings' took a while and the first was not held until 1986 in Exeter. I was there as part of the Quaker Women's Group presenting the Swarthmore Lecture and my family came too. In fact the children enjoyed themselves so much that they insisted that we should make it a family tradition. So we continued to go not only to Yearly Meetings in London but to residentials in Aberdeen in 1989, in Warwick in 1993, in Aberystwyth in 1997, in Exeter in 2001 and in York in 2005.

From 1991 it was decided to hold Summer Gatherings between Residential Yearly Meetings. These were to be predominantly social affairs with no decision-making agenda. The Yearly Meeting in these years was still held in May in London. We did not go to the first Summer Gathering in Bradford but did attend those held in Lancaster in 1995, Canterbury in 1999, Loughborough in 2003 and Stirling in 2007.


The first Yearly Meeting Gathering was held in York in 2009, followed by Canterbury in 2011 and Bath in 2014. This year YMG will be at the University of Warwick and I will be there.

Any longer residential gathering is bound to be an intense experience, sometimes almost overwhelming, and I have sometimes found it difficult, needing to carve out spaces of solitude and calm for myself. But there have been many happy and uplifting times as well as difficult ones and I have always been glad that I have gone.
Posted by Gil S at 4:23 pm