Turning Inside Out again? 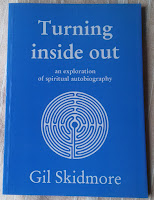 For the second time a course on 18th century Quakers which I had hoped to run for Woodbrooke has been cancelled because of a lack of bookings. This has led me to consider what to do next. I am not going to abandon the 18th century but perhaps the time has come to approach it in a different way. I shall continue to try to 'introduce you to my friends' through this blog and I will look into the possibility of creating an online course for Woodbrooke for 2020.

At the same time I will put some more effort into research and writing and try to make progress on my biography of Catherine Payton Phillips. I have ideas for some journal articles which I will focus on. I know from long experience that, as the historian Barbara Tuchman put it, 'Research is endlessly seductive. Writing is hard work'. I think that now is the time to do some of that work.

Also, for a while now I have been feeling nudged towards a new direction - or rather to a new approach to an old path. It is twenty-five years since I set out as a Joseph Rowntree Quaker Fellow to give workshops on spiritual autobiography up and down the country. I talked about this in earlier posts on this blog - first of all ten years ago and then later when I was wrestling with some difficult questions.

Having published my book Turning Inside Out; an exploration of spiritual autobiography in 1996 and given up the workshops after ten years, I thought that spiritual autobiography, although still an interest, had faded into the background of my life, except in its connection to my historical research and writing.

Recently though I have been contacted by a few Friends in different parts of the country who had read my book and wanted to use it as a basis for workshops in their meetings to allow people to share their spiritual journeys. Encouraged by this I got out my notes and at long last transcribed the two background talks I gave as part of the workshops from longhand to the computer. Of course they need updating but I may now look at ways of publishing them as I originally intended to do.

I am also putting together a new Woodbrooke course with Rhiannon Grant on 'Spiritual Blogging' which is due to run in May 2019. It will be a new experience to work with someone else on different approaches to spiritual autobiography and I am looking forward to it.

I am also aware that I need to do more work on my own spiritual autobiography. I have a title - and used it for this blog - but so far I have only written fragments in different places. I was inspired by some of the writers I met at the QUIP conference earlier this year, especially Iris Graville and her memoir Hiking Naked, both to read more and to go back to writing about my spiritual journey. I need to turn inside again before I can take the next step, turn inside out and share what I have found with a wider audience.

So it seems to me that what I am being led to do is not so much a change of direction as a closer integration of the two strands of my endeavour - spiritual autobiography and 18th century Quakers. I need to allow what appear to be stumbling blocks to become stepping stones.
Posted by Gil S at 11:30 am

Both the spiritual autobiography and the spiritual blogging workshops are likely to be very well subscribed. As we say on this side of the Pond, go for it!